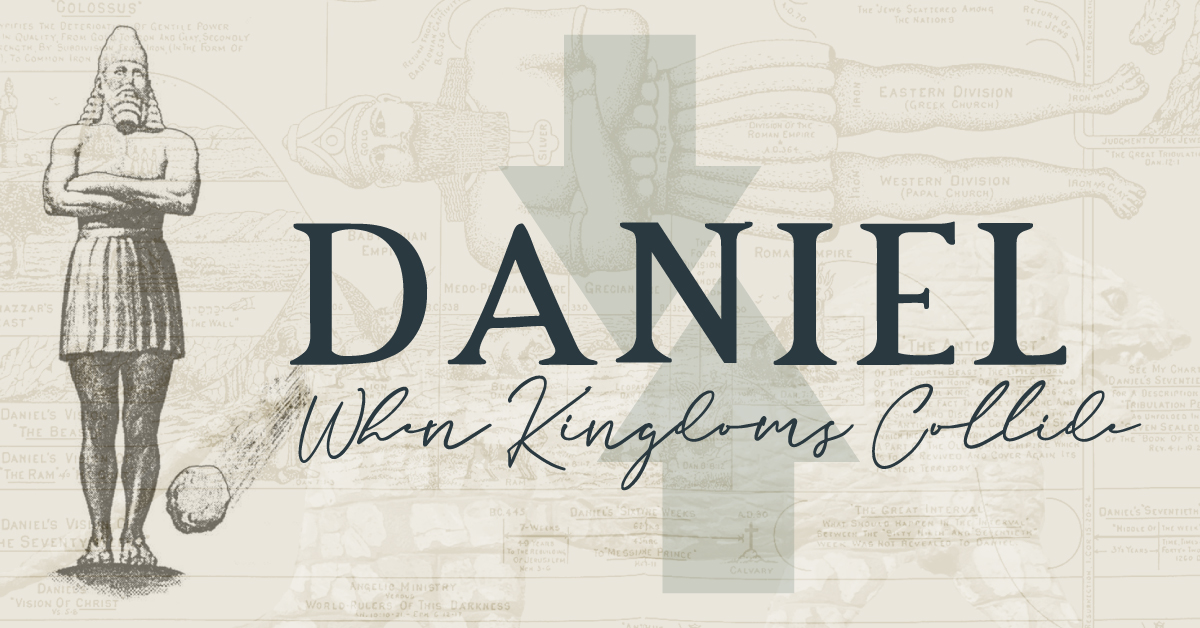 In 1781, legend insists that as British troops left Yorktown, laying their weapons at Washington’s feet, they sang the well known tune, “The World Turned Upside Down.” When kingdoms collide the world is truly turned upside down. We experience this feeling in a myriad of ways even today; nations battle for dominion, groups grasp for power, and individuals chase influence. However, nothing turns our world more inside out than when the kingdom of God collides with the kingdom(s) of man. This daily collision demands our love and our loyalty; it demands our whole life.

Over the next fourteen weeks we will be walking through the tales and visions from the book of Daniel as he invites us to follow God despite the oppositions we face in this world. For he reveals that God reigns and is bringing his everlasting kingdom to earth, and it is this reality that teaches us and motivates us toward faithful living among the kingdoms of this world.

We invite you to join us as we walk through this dynamic and engaging book. For many the book of Daniel can be intimidating so as we begin this walk together here three suggestions to help you engage God’s Word.

There is so much we would love to cover in preparing for Daniel, but here are few thoughts we think would be helpful as we step into chapter one.

You can think of exile as the experience of living as a stranger away from home. In many ways this is the status of all Christians, who live as citizens of heaven here in the world of man. Yet, living as a citizen of one nation inside another amounts to an impending collision. So what should an exile do?

In the same way that 1 & 2 Peter taught us how to live as exiles in our world, Daniel shows us what it looks like through tales and visions from his own exile. Taken from his home when he was just a boy, Daniel and his friends give us a picture of faithful living when kingdoms collide and a hope in God’s coming kingdom to motivate us toward obedience to God no matter our current situation.

Though there are many themes within Daniel one of the most prominent is that Daniel isn’t really the main character, it’s God. God is the one who elevates and destroys nations. God delivers. God gives wisdom. God gives revelations of reality and what is to come. God is the main actor in Daniel and thus the greatest comfort in our exile. For even though the world is in chaos and you feel like you don’t belong, God is there with you.

Daniel 1 begins with a lot of unfamiliar names and places, which can disorient us more than set the stage for what is to come. From the beginning, Daniel places us in the midst of two kings and two kingdoms, with one being overtaken. Judah is overthrown by Babylon. Yet within these two verses is contained hundreds of years of history and geopolitical chess moves. So let me try to paint the landscape and help us understand Daniel more clearly.

To get our bearings, let’s remember the kingdom of Israel, which was composed of twelve tribes. The apex of this kingdom is King David, a man with many faults and failings, but who desired to follow God’s leading and led a unified kingdom. However, soon after his rule it all starts to go downhill.

After King David the kingdom splits and is led by a barrage of different kings. Here is a chart to help you sketch some of this history.  I want to pick up the story with King Hezekiah (in the yellow box on the chart), but you can see that within two generations the kingdom of Israel splits (~930 BC). Then for two hundred years you have the northern kingdom of Israel separate from the southern kingdom of Judah. And in 722 BC, 200 years after the split, Israel, the northern kingdom fell to the Assyrians. This is really when our story picks up, the beginning of the lonely kingdom, Judah. The other Israelite tribes have fallen. Judah is all that’s left, and its king is Hezekiah.

Hezekiah is a man who is miraculously saved by God in the face of the Assyrians. (As a side note, this event, this saving from the Assyrians is one of the most historically attested Old Testament stories. Found in Kings, Chronicles, Isaiah, and Micah, but also found in several Assyrian texts like the Taylor Prism.)

After Hezekiah’s deliverance and subsequent healing by God from certain death, he is given a promise that God would continue to defend the city against the Assyrians. What a promise.

Yet, the Assyrians were knocking on Judah’s door. They were conquering the world, and they were terrifying. The Assyrians' brutality continues to shock historians, but more than that the Assyrians boldly flaunted their cruelty in order to scare the world into submission. So, as you might expect, Hezekiah doesn’t trust God’s promise, and when Babylon, a country to the far east, sends emissaries to strike an alliance, Hezekiah jumps at the chance by inviting them in and showing them all the gold and treasures of the temple as a way of solidifying an alliance.

Hezekiah takes control into his own hands. He trusted Babylon instead of God, and in the end it doesn’t work. In a tragic irony, Isaiah the prophet tells Hezekiah what’s to come:

“Behold, the days are coming, when all that is in your house, and that which your fathers have stored up till this day, shall be carried to Babylon. Nothing shall be left, says the LORD. And some of your own sons, who will come from you, whom you will father, shall be taken away, and they shall be eunuchs in the palace of the king of Babylon.” Isaiah 39:6-7

So, less than 100 years after this prophecy we hear the fulfillment of Isaiah in the words of Daniel 1:1-2 as Judah is taken to exile. Two kings and kingdoms struggling for control. And the Babylonians coming out on top.

Genre is a tool to categorize types of writings so as to help us read rightly. For instance, if a writing starts with “Once upon a time…” you know that it is some sort of fairy tale and not a journalistic report from the newspaper. The Bible is made up of multiple genres: poetry, history, proverbs, narrative, biography, apocalyptic, as well as many others, with all sorts of variations in between. Though Daniel defies tidy genre classifications there are two genres I would like to highlight, which are helpful as we begin Daniel.

The first six chapters of Daniel give us an account of the history and experiences of a few Jews during the time of Babylonian Exile. Daniel’s historical narrative covers a time frame around 586 BC to nearly 537 BC.

As you might expect, historical narrative is meant to relay to us what actually happened during a specific time period to a specific people. The overwhelming inclusion of names, places, and events reveals this type of literature to us.

So this historical narrative of Daniel communicates interesting faucets of history. For instance, it was not the Babylonians who overcame Judah, but God who gave Judah into Babylon’s hands. It tells us how God preserved a couple faithful Jews. How God humbled a king and judged another. This historical narrative shows us that God is the main actor in history. That God is sovereign.

Additionally, this type of historical narrative gives us a pattern of faithfulness to God in the figure of Daniel and his friends. In many ways we read it like a biography. Daniel’s faithfulness inspires our own faithfulness. We look for parallels from his time to ours, from his actions to ours. Of course there is no one-to-one correspondence, but Daniel’s story (historical narrative) stokes our imagination to consider ways we are tempted to compromise our faithfulness and loyalty to God and how we might strive toward faithfulness in our own time.

This is the fun part. Throughout Daniel there are various dreams, visions, and prophecies, but in the final six chapters they are the main feature. This sort of literature is often called apocalyptic. And though we often associate “apocalypse” to mean the end of the world, “apocalypse” simply means “to reveal,” or “uncover” what is real, or true reality. It is often mediated by an otherworldly being, requires interpretation, and can showcase the truth of the present, where everything is headed (the end of time), or even a glimpse into the supernatural world. It is often cosmic in scope, vivid, symbolic, metaphorical, dramatic, and prophetic. It is meant to evoke our emotions and help us to endure.

Apocalyptic literature should be handled carefully. It is a type of literature that sparks our curiosity, but one in which we should also exercise caution. There are often multiple layers of meaning and even referents. Apocalyptic is not primarily a timeline, for even within most visions you find the character wanting to know the timeline and the mediator saying don’t worry about it (Dan. 12:7-9). The goal is not exactly to reveal when, but to reveal the fact that God is working; to reveal that this world is much bigger than one might think, and definitely bigger than your current situation; to reveal that in the end God’s kingdom will fully reign. It is a vision to help us endure and live faithfully in the time we are given.

There are a lot of great resources out there. Here are a few accessible resources you might consider for further exploration.