Here at First Free we believe God has given the church elders, men who have been chosen by God to know, lead, feed, and protect his flock. Over the next year, we’d like to help you get to know our elders better through an in-depth interview with one of our elders each month. This month we’re talking to Ken Bengtson. 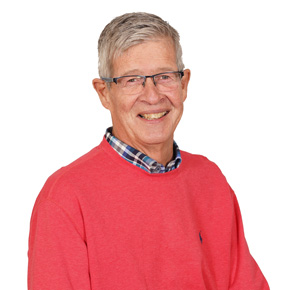 Tell us a little bit about yourself.
Connie and I have seven adult children and ten grandchildren. Anita (my first wife) died in 2005 from pancreatic cancer. From that union we had two girls and three boys, the youngest girl was adopted from Guatemala. Connie has a son and daughter.

What was life like growing up? And how did you come to know Christ?
I was born in Racine, Wisconsin, which is between Milwaukee and Chicago adjacent to Lake Michigan. I am a twin, one of eight children growing under the loving care of believing parents. I feel like I always knew and loved the Lord, but I made a real commitment to follow him when I was about twelve. Scripture memory work and Bible reading was an integral part of our family life. My mom would read books like Pilgrim’s Progress while we ate breakfast.

How did you end up in Wichita?
After college I moved from Wisconsin to Wichita, taking a job with Jack DeBoer, a developer with projects throughout many states. We looked at several churches and knew about the Free Church from my hometown, so we tried it.

It was 1971, fifty years ago. The church was fairly new and at the edge of Wichita in the Northeast quadrant of the city. We obviously felt it was a good fit and soon jumped in and served. Amazing growth and stability along with solid teaching and friends have blessed us through life's joys and heartaches.

You mentioned the blessing First Free’s been, what has that looked like in your life?
One reason I’d encourage any believer to be connected with the church family was that there was a great deal of love and support during the very difficult times, especially when Anita passed away. The friends and people we’d gotten to know were helpful, between meals and prayers and visits. Demonstrating love and care. The hard things about cancer and the death and those experiences opened up my eyes to the difficulty of living with chronic illness and single parenthood. But God brought good out of hard times. Pastor Phil’s grief class was going on when Anita passed and that was a good thing. Before I attended that I was oblivious of it all. I didn’t realize that it affects you for years afterward. I would walk into situations that remind me of her and a flood of emotions would hit me by surprise. I didn’t expect that at all.

After Anita passed away I met Connie. She was a single mother who worked at the engineering firm I was at. She had become a believer about ten years before meeting me. The idea of dating or getting back in a relationship was scary. Quite a few people recommended that I get to know her. People from all over would talk about her. So, I called her up and she said it was the hardest interview she’d ever had. I had a ton of questions to see if she was a solid believer before we got serious. This was four months after Anita’s death. That might seem quick to other people but it fills a huge void. I was aware that second marriages don’t always work. I didn’t make a very good single guy but I wasn’t stupid. The Lord’s hand was in it. Headed towards fifteen full years together.

When did you become an elder, and what’s that been like?
I first served as an elder in my 40s or 50s. Though I could have served as an elder earlier than I did, I knew the seriousness of the position and wanted to be sure I was capable and ready. The letter from Paul to Titus addresses the qualifications and responsibilities of an elder—protecting sound doctrine, able to teach, and to rebuke and correct as needed. We are called to "shepherd" well. There is much written on how a good shepherd takes care of his flock. It's a service of knowing, caring for, and loving people so as to build one another up.

The elder board has grown in size with the size of the church. In one sense little has changed. There’s always been, even with turnover, a group of well-focused men in a reasonable age group and discussions were healthy and they made the right decisions. Focus has changed with Josh’s encouraging more focus on the specifics of shepherding people. There’s always a challenge to be more intentional about that.

The biggest challenge is the responsibility of the office. The desire to do the right thing. And sometimes it’s hard to know what that is. But that’s where having other men to lean on came in. It’s also discouraging to see people making mistakes that just make you think, “Please don’t do this. You’re hurting your kids, your wife, nothing good will come of this.”

As an elder, do you have any final words of encouragement for the congregation?
Stand firm. Press on.