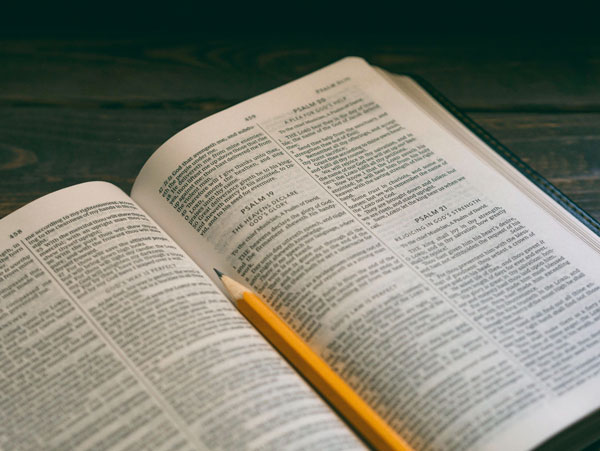 Poetry is powerful. It engages both mind and heart. It uses a small number of words to convey big truths, imprinting them upon us with vivid imagery, making us feel and experience them. An image is indeed worth a thousand words. An imagination is worth a million.

According to Dictionary.com, imagination is “the faculty…of forming mental images or concepts of what is not actually present to the senses.” Imagination does not deal exclusively with things that are unreal, merely things that are not “present to the senses.” And therein lies its power. The faculties of sight and hearing and taste can only perceive the present, but imagination perceives past and future too.

Psalm 96 spans the entire history of the universe in thirteen verses—beginning to end, creation to consummation. It calls God’s people—and all people—to perceive realities that cannot be apprehended by the senses. For people living in uncertain, fearful, seemingly hopeless times, nothing could be more important. As we’ve discussed previously, Book IV of the Psalms gives us the prayers of God’s people from their exile in Babylon. You cannot live faithfully in such evil days without the faculty of imagination. You won’t make it. Not if your hope depends upon what your eyes can see.

In the coming weeks, we will be inundated with news of suffering and death. We will experience grief, frustration, fear, and boredom. Perhaps most of all, we will experience homesickness (despite being stuck at home!). Holy Week is not the same without gathering together. Easter is not the same without bundt cakes. Worship is not the same from the couch. The world shaped by COVID-19 is a foreign place, and it makes us long for home, the place where everything is as it should be. Living faithfully in this “exile” requires a Christian imagination. We must see God for who he truly is in times that seem to hide him from sight.

As we pray Psalm 96 this week, I want us to meditate on three images that will keep us grounded in reality in these uncertain times. Be sure to spend extended time simply picturing God with your mind’s eye, seeing him as he is described in this psalm. Then pray using the ACTS method and the following prompts. I advise breaking up the psalm into three parts and praying over one section each day.

Picture it: God formed heaven and earth out of nothing. Everything else we bow down to is dead and worthless, a creation rather than a Creator. One day, all the earth will know that. His salvation will be known throughout everything he has made.

Adoration: Worship God as the only true God, maker of everything.

Confession: Confess the ways you have worshiped anything else.

Thanksgiving: Thank God for making salvation possible in Christ and making it known to you through the preaching of the gospel.

Supplication: Ask God to make his glory known everywhere—through missions, through our church, and through you.

10Say among the nations, “The Lord reigns!
Yes, the world is established; it shall never be moved;
he will judge the peoples with equity.”

Picture it: Even now, God is on this throne. One day, all will bend the knee to King Jesus and offer tribute. He will judge the world and put an end to all rebellion.

Adoration: God is worthy of all glory and every offering we could bring.

Thanksgiving: Thank God that he will judge with equity and put an end to sin. Thank him that Christ suffered the wrath we deserve for our rebellion.

Supplication: Pray that God’s people would make it known by word and deed that God is king over all.

11Let the heavens be glad, and let the earth rejoice;
let the sea roar, and all that fills it;
12let the field exult, and everything in it!
Then shall all the trees of the forest sing for joy
13before the Lord, for he comes,
for he comes to judge the earth.

Picture it: God will make all things new. All of creation—heaven and earth, seas and trees—will be free to sing his praises. Everything will be made right. We’ll be home at last.

Adoration: God is powerful and good. This glorious future is certain because his purposes cannot fail.

Confession: How have you put your hope in something else to make things “right”? How have you grown comfortable in this fallen world instead of hoping for redemption?

Thanksgiving: Thank God that we will experience his renewed creation for eternity because of Christ.